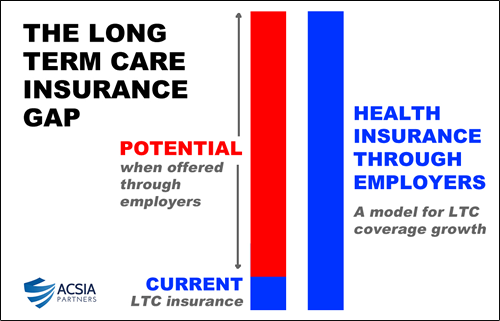 "We already offer the protection directly to consumers in all states," Wilson says. "Now, thanks to James, we will make it a staple of employee benefit programs too."

Dettman is a veteran of the insurance and employee benefits industries. He will serve as one of four Worksite Sales Directors for xACSIA Partners Insurance Agency, along with Dan Cahn, Ed Jette, and Mario Sestito.

The need for long-term care protection is great, according to Wilson, Dettman and their colleagues.

Nearly three in four Americans over 65 will need long-term care at some point, they say, quoting the U.S. Department of Health and Human Services. So virtually all families will be affected. Somebody will probably need care: if not a spouse or parent, a grandparent, sibling, or other relative.

This is a very big deal, Wilson and Dettman assert, because --

"Long-term care insurance is the answer," Wilson says, "but it's not getting to everyone through the home. So we'll be offering it aggressively through another channel, the workplace.”

xACSIA Partners Insurance Agency is a pioneer in worksite LTC with a successful team in place, and that’s why Dettman joined them, Wilson says. “He's here to help us take it to the next level.”

The potential is very large. According to the American Association for Long-Term Care Insurance, only 10 million or so Americans have bought long-term care insurance; and only a fraction have gotten it at their place of work.

By contrast, over 270 million have health insurance, and a majority, 155 million, have it through their employer, according to the Urban Institute.

“Dettman will help us leverage a proven approach,” says Wilson. “If we do what the health insurance industry did, within a few years up to 155 million can have easy access to LTC protection through their jobs.”

Martha Wilson is a leading long-term care agent serving consumers and organizations in AR, CA, CO, OR, WA, with colleagues covering all other parts of the country.

This is the only benefit that my employees have gone out of their way to personally thank me. Some of them have even gone on to say - without you bringing in this education, I would have never… Read More